Phil Mayes Posted on July 24, 2008 Posted in Computers No Comments

How do you close a program in Windows? Alt-F4, of course.

How do you switch between documents? Ctrl-F6, stupid! 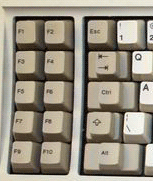 Who picked these finger-bending choices?  To answer this we must go back, back, back in time, to the earliest days of the IBM PC, when the keyboard looked like this:
Yes, only 10 function keys, and all on the left.  Also note that the control key was on the center row, where God intended it.  Now switching to the next document – Ctrl-F6 – is a simple action of two adjacent keys; closing the program a simple Alt-F4.

The IBM PC was a skunkworks project staffed by engineers; when it became successful, IBM management (I surmise) ordered several changes to bring it in line with the mainstream. Firstly, the arrow keys and numbers shared keys at the right-hand side (as they still do); these were split into separate groups, thus taking up more horizontal room. Secondly, F11 and F12 were added to match the PF1-PF12 keys on 3270 terminals.

At some stage, the control key was moved to the bottom row, and the much-reviled Caps Lock key is now in its place. And so for more than 20 years, we have struggled with finger-stretching combinations like Ctrl-F6 when they were originally very rational placements.

(Just to add to the confusion, Microsoft recently introduced a keyboard with the function keys arranged in 4 groups of 3, not 3 groups of 4.)