The existence of elections, civil law and free speech gives the appearance of a functioning democracy, but in practice they are not acting as intended.

1. Voting is not Representative

Voting is skewed in America in many ways.

There are very visibly two standards of justice.

The net result of these distortions can be measured, and the results show that democracy is largely an illusion:

1. Budgets do not Match How People Want the Money Spent

People from both left and right want a budget that is well to the left of present allocations. A Program for Public Consultation report found that Republicans would cut defense spending by $56bn and Democrats by $131bn for an average cut of 18%. The public would increase energy conservation and renewable energy by 110%, job training by 130% and college financial aid by 90%.

2. The Wishes of the General Public are not Carried Out

A recent study by Gilens and Page analyzed 1,779 policy outcomes and determined that when a majority of citizens disagrees with economic elites and/or with organized interests, they generally lose.

“the preferences of the average American appear to have only a minuscule, near-zero, statistically non-significant impact upon public policy.”

The preferences of economic elites carries 15 times the weight of ordinary citizens.

A statement like this usually ends with a call to action.
I will leave that for another day, and instead make this a call for awareness. Tell your friends. Pass this on.
When enough people understand how they are being fooled, change will happen. 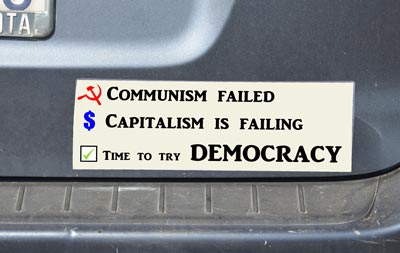