Reconciling the Various Reasons for Trump 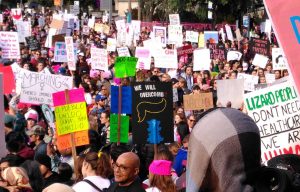 After the election, I concluded that Trump won with three appeals:

and that I approved of the first two. (It’s now clear that all three are unlikely to happen.)

Many people have offered reasons why Trump won, and they fall into three areas:

I won’t go into the electoral issues (Comey, gerrymandering, fake news, Clinton, Russia) here. There are stats that make a good case for both jobs and racism being the cause. Can we reconcile the two?

I have an article (not out yet) arguing that fear of others is the defining characteristic of conservatives. Edsall says that only cities with a population greater than 1 million showed economic growth, so maybe low population density causes both xenophobia and weak economic opportunities.

Finally, the statistical tool of regression can tease apart which had more influence on the 2016 vote: authoritarianism or symbolic racism, after controlling for education, race, ideology, and age. Moving from the 50th to the 75th percentile in the authoritarian scale made someone about 3 percent more likely to vote for Trump. The same jump on the SRS scale made someone 20 percent more likely to vote for Trump. Source