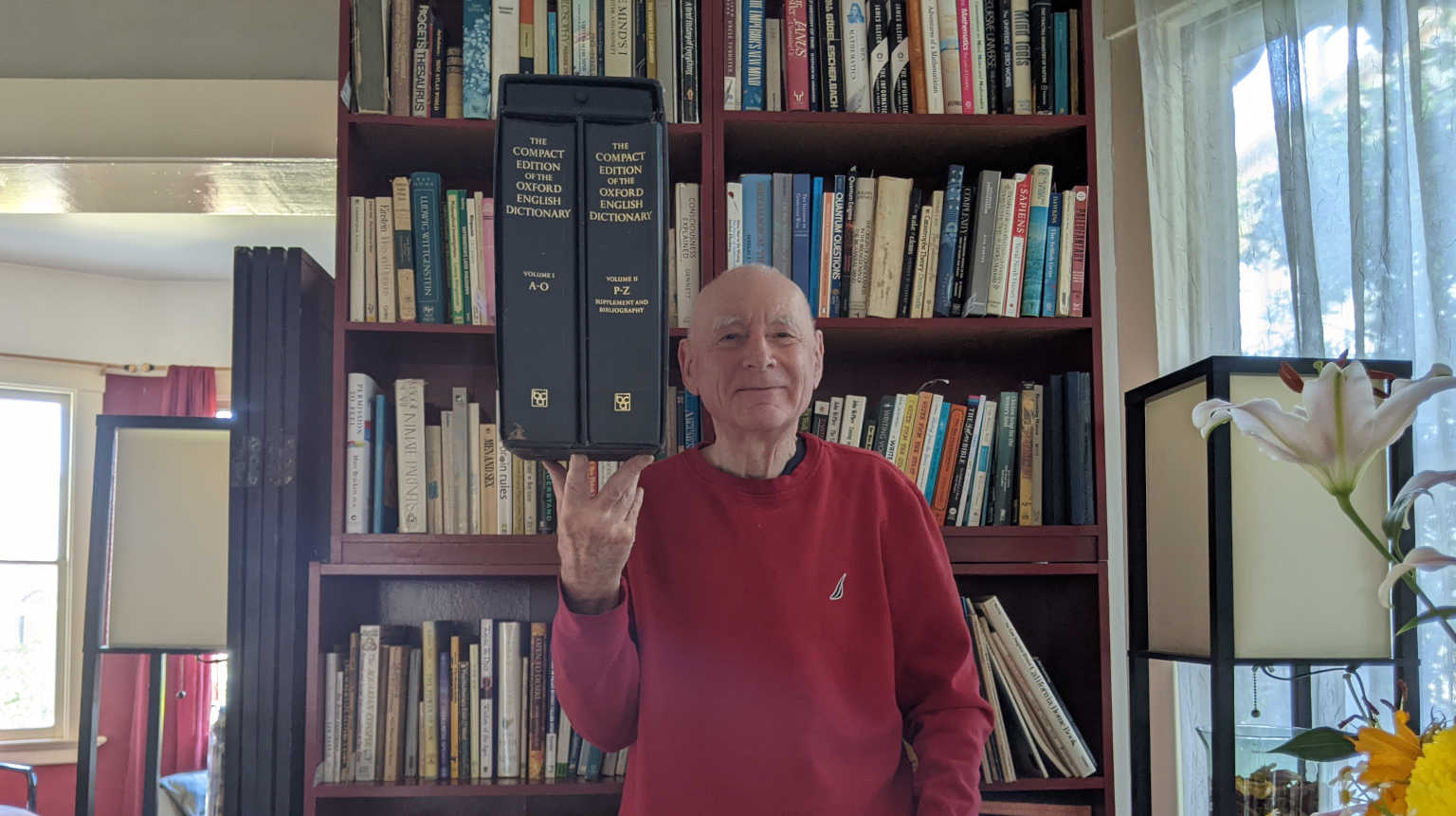 We humans are a wildly successful species. Why is that?

As life developed, it first responded to the world with reflexes, then emotions, then by thinking, but it was the human invention of language that turned thinking into a superpower.

It started by using words as labels to stand for things like apples, actions like running, categories like fruit, and interior experiences like sadness. These words were then used as metaphors to explain the world, and those explanations were further labeled and combined to create ideas that we cannot see directly like God, gravity or negative numbers. “Run over the figures for me.” Run? Over? Figures? All these words have their origins in the physical world.

Language is how ideas are passed from one person to another, and each person can benefit from the thoughts of many others.

In this way, we have constructed a house of understanding whose foundation rests on the ground of experience and whose bricks are ideas stacked one on top of another and held in place by the mortar of logic. This house was at first limited in size by the capacity of the human mind, but when writing was invented, the insights of individual people could accumulate without end.

By building and sharing knowledge in this way over millennia, we have learned how to understand and control the world more than any other species. Thinking has been the source of inventions that formed society, from textiles to television. Human civilization is the consequence — and proof — of the power of thought.

Before using language to navigate in the world, we used emotions from the limbic system and instincts from the reptilian brain. We experience these as intuitions and feelings, not as words.

Our emotions have two grand purposes. Imagine you’re a microscopic organism back in the depths of time. There are things you need and gravitate toward like food and sunlight, and dangerous things you move away from like predators, acidity and extreme temperatures. These two aspects of survival – attraction and avoidance – are the two great reasons behind all individual behavior. These forces are still active today, working at the emotional level. They are well described by calling them love and fear.

There are many other emotions controlling the complex species that we have become, but these are the two great emotional drivers of behavior. We are drawn to that which we love, and avoid that which we fear.

The two ways are at odds

Our emotions have been field-tested for millions of years, and by taking a cautious attitude, they have helped us survive. For example, seeing something lying across the path, it was a better choice to be scared by a stick than bitten by a snake.

But now, with the development of the neocortex, we have an alternative way to assess risks and understand the world, a way that sometimes contradicts our senses or our feelings. Most people believe that when the sun goes across the sky, it is actually because the earth is rotating, not because the sun is moving.

And yet our emotions are in no way obsolete. They excel in certain areas such as reading body language: “I should have listened to my gut instead of lending him money.” People who cannot read these signals struggle in the world.

It appears that emotions are intricately bound up with all decision-making. Neuroscientist Antonio Damasio studied people with damage in the amygdala — the part of the brain where emotions are generated — and were not able to feel emotions. Peculiarly, this also removed their ability to make decisions. There are usually multiple possibilities to choose from, and even their choice of what to eat was difficult — should it be the chicken or the turkey? With no rational way to decide, these test subjects were unable to arrive at a decision.

Having these two ways of interpreting the world – the modern neocortex and the ancient animal brain – sometimes makes choosing an action extremely difficult. We are prone to make choices based on feelings more than reason, then come up with reasons that justify those feelings. We don’t know when to trust our emotional eye and when to believe our rational eye. There are many pairs of words for this dichotomy: thinking and feeling, heart and mind, body and soul, head and heart, mental and physical. It’s very clear from the multitude of terms that this division is something that we struggle with.

Much of our distress as humans is because we are receiving contradictory messages about the world. It is like listening to two radio stations at once.

We need to integrate these modes

The problem of different senses generating dissimilar information has arisen more than once in evolution. It was a challenge every time a new sense developed. For instance, when vision arose, how did it relate to the sense of touch? Species have resolved this problem of merging disparate senses multiple times. When you see and hear John approaching you and feel him shaking your hand, your different senses all agree that this is John.

Humans are a transitional species that has not yet integrated the new way of understanding the world through ideas with our sensory and emotional responses. This idea provides a starting point for a number of other discussions.